ONE OF THE BEST THINGS YOU CAN DO FOR YOUR BRAIN

YAWN – It’s one of the best things you can do for your brain.
By Andrew Newburg 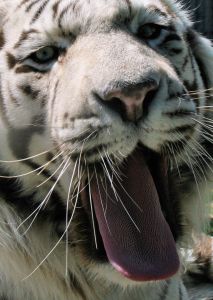 Go ahead: Laugh if you want (though you’ll benefit your brain more if you smile), but in my professional opinion, yawning is one of the best-kept secrets in neuroscience. Even my colleagues who are researching meditation, relaxation, and stress reduction at other universities have overlooked this powerful neural-enhancing tool. However, yawning has been used for many decades in voice therapy as an effective means for reducing performance anxiety and hypertension in the throat.

Several recent brain-scan studies have shown that yawning evokes a unique neural activity in the areas of the brain that are directly involved in generating social awareness and creating feelings of empathy. One of those areas is the precuneus, a tiny structure hidden within the folds of the parietal lobe. According to researchers at the Institute of Neurology in London, the precuneus appears to play a central role in consciousness, self-reflection, and memory retrieval. The precuneus is also stimulated by yogic breathing, which helps explain why different forms of meditation contribute to an increased sense of self-awareness. It is also one of the areas hardest hit by age-related diseases and attention deficit problems, so it’s possible that deliberate yawning may actually strengthen this important part of the brain.

For these reasons I believe that yawning should be integrated into exercise and stress reduction programs, cognitive and memory enhancement training, psychotherapy, and contemplative spiritual practice. And, because the precuneus has recently been associated with the mirror-neuron system in the brain (which allows us to resonate to the feelings and behaviors of others), yawning may even help us to enhance social awareness, compassion, and effective communication with others.

Why am I so insistent? Because if I were to ask you to put this magazine down right now and yawn 10 times to experience this fabulous technique, you probably won’t do it. Even at seminars, after presenting the overwhelmingly positive evidence, when I ask people to yawn, half of the audience will hesitate. I have to coax them so they can feel the immediate relaxing effects. There’s an unexplained stigma in our society implying that it’s rude to yawn, and most of us were taught this when we were young.

As a young medical student, I was once “caught” yawning and actually scolded by my professor. He said that it was inappropriate to appear tired in front of patients, even though I was actually standing in a hallway outside of the patient’s room. Indeed, yawning does increase when you’re tired, and it may be the brain’s way of gently telling you that a little rejuvenating sleep is needed. On the other hand, exposure to light will also make you yawn, suggesting that it is part of the process of waking up.

But yawning doesn’t just relax you—it quickly brings you into a heightened state of cognitive awareness. Students yawn in class, not because the teacher is boring (although that will make you yawn as well, as you try to stay focused on the monotonous speech), but because it rids the brain of sleepiness, thus helping you stay focused on important concepts and ideas. It regulates consciousness and our sense of self, and helps us become more introspective and self-aware. Of course, if you happen to find yourself trapped in a room with a dull, boring, monotonous teacher, yawning will help keep you awake.

Yawning will relax you and bring you into a state of alertness faster than any other meditation technique I know of, and because it is neurologically contagious, it’s particularly easy to teach in a group setting. One of my former students used yawning to bring her argumentative board of directors back to order in less than 60 seconds. Why? Because it helps people synchronize their behavior with others.

Yawning, as a mechanism for alertness, begins within the first 20 weeks after conception. It helps regulate the circadian rhythms of newborns, and this adds to the evidence that yawning is involved in the regulation of wakefulness and sleep. Since circadian rhythms become asynchronous when a person’s normal sleep cycle is disturbed, yawning should help the late-night partygoer reset the brain’s internal clock. Yawning may also ward off the effects of jet lag and ease the discomfort caused by high altitudes.

So what is the underlying mechanism that makes yawning such an essential tool? Besides activating the precuneus, it regulates the temperature and metabolism of your brain. It takes a lot of neural energy to stay consciously alert, and as you work your way up the evolutionary ladder, brains become less energy efficient. Yawning probably evolved as a way to cool down the overly active mammalian brain, especially in the areas of the frontal lobe. Some have even argued that it is a primitive form of empathy. Most vertebrates yawn, but it is only contagious among humans, great apes, macaque monkeys, and chimpanzees. In fact, it’s so contagious for humans that even reading about it will cause a person to yawn.

ore attacking, Olympic athletes yawn before performing, and fish yawn before they change activities. Evidence even exists that yawning helps individuals on military assignment perform their tasks with greater accuracy and ease. Indeed, yawning may be one of the most important mechanisms for regulating the survival-related behaviors in mammals. So if you want to maintain an optimally healthy brain, it is essential that you yawn. It is true that excessive yawning can be a sign that an underlying neurological disorder (such as migraine, multiple sclerosis, stroke, or drug reaction) is occurring. However, I and other researchers suspect that yawning may be the brain’s attempt to eliminate symptoms by readjusting neural functioning.

Numerous neurochemicals are involved in the yawning experience, including dopamine, which activates oxytocin production in your hypothalamus and hippocampus, areas essential for memory recall, voluntary control, and temperature regulation. These neurotransmitters regulate pleasure, sensuality, and relationship bonding between individuals, so if you want to enhance your intimacy and stay together, then yawn together. Other neurochemicals and molecules involved with yawning include acetylcholine, nitric oxide, glutamate, GABA, serotonin, ACTH, MSH, sexual hormones, and opium derivate peptides. In fact, it’s hard to find another activity that positively influences so many functions of the brain.

My advice is simple. Yawn as many times a day as possible: when you wake up, when you’re confronting a difficult problem at work, when you prepare to go to sleep, and whenever you feel anger, anxiety, or stress. Yawn before giving an important talk, yawn before you take a test, and yawn while you meditate or pray because it will intensify your spiritual experience.

Conscious yawning takes a little practice and discipline to get over the unconscious social inhibitions, but people often come up with three other excuses not to yawn: “I don’t feel like it,” “I’m not tired,” and my favorite, “I can’t.” Of course you can. All you have to do to trigger a deep yawn is to fake it six or seven times. Try it right now, and you should discover by the fifth false yawn, a real one will begin to emerge. But don’t stop there, because by the tenth or twelfth yawn, you’ll feel the power of this seductive little trick. Your eyes may start watering and your nose may begin to run, but you’ll also feel utterly present, incredibly relaxed, and highly alert. Not bad for something that takes less than a minute to do. And if you find that you can’t stop yawning—I’ve seen some people yawn for thirty minutes—you’ll know that you’ve been depriving yourself of an important neurological treat.
________________________________________
Andrew Newburg is director of Penn’s Center for Spirituality and the Mind. This essay is from the book: HOW GOD CHANGES YOUR BRAIN by Andrew Newberg, M.D. and Mark Robert Waldman.

Wow! This really works. The more I yawned, the more powerful and elongated they became. Maybe because it is 11 pm my time here, when I should be getting to bed anyways but I am a night owl an not usually tired at this time.  It only took 3 tries!

Have a Great Day!

I came from a financial background including banking, insurance and real estate. I am an advocate for people taking there health into their own hands. That includes mental, physical and spiritual health. I am also a mother and grandmother (babcia) to a delightful, rambunctious, curious, beautiful, precious....(I can go on for ever) little boy.. who melts my heart every day.
View all posts by Donna →
This entry was posted in WISDOM and tagged brain, yawning. Bookmark the permalink.