Well I am finally back.  I was without a computer for about 8 days.  I was having problems before but last Monday all systems went down.  Funny really it was the same day as the earthquake.  I live in Ottawa, Canada for those who don’t know, and last Monday afternoon June 21, we had an earthquake.  The epicenter was just 60 kilometers north of here on the Ontario/Quebec border.  We don’t get many earthquakes and when we do they are usually minor ones.  This was one of the bigger ones at 5.5.

Everything is back to normal now, but while I was incommunicado so to speak, I learned some lessons about myself and about technology.  I use my computer for everything. My whole schedule, my work, everything is on the computer.  I even communicate with my family and friends online instead of calling long distance.

But, what if something was to suddenly happen; with a snap of your fingers your computer or iPhone or blackberry what ever you use suddenly goes down.  Everything is shut down for an indeterminate amount of time.  All technology is hit.  No computers, no cell phones, no cable TV, no satellite TV. What would you do?

I swore off TV almost a year ago because I found it got too violent and the shows were getting to be the same.  Now I have just come back from a week of no computer and that was hard.  It really was.  I never thought I would say that I was addicted to the computer but I felt like I was going through withdrawal symptoms for the first few days when the computer was down.  Mind you I couldn’t just turn around and turn on the TV either, because I had canceled my cable just after hockey season was over.   It was like quitting smoking but instead it was the computer!  Seriously, I didn’t know what to do with myself.  So I started snacking again.  That was not good.  I finally gave in and asked a friend if I could go over to her house to check emails and my schedule and a few things.

I couldn’t do it.  I couldn’t last a week.  What I did learn is technology is great but it is not foolproof.  You always 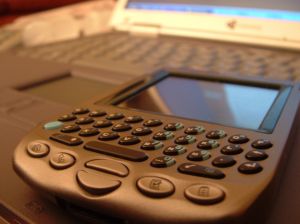 need a backup plan.  We are trying to save paper and save the trees.  Is there anything out there instead of paper we can use to backup technology in case something serious does happen? We backup computers all the time, but only onto other products that need the computer to read them.  I am talking about something that we can use to backup our information on the computers in case of a meltdown so to speak and we will be able to read the information without the computers or any technology.  Like paper!

So, what would you do if you were in a similar situation?  No computer, iphone, blackberry or similar technology and no TV for a week?  Would anyone be brave enough to try it and still go on with their daily lives?  AND NOT GO CAMPING!!!

Is there anything out there besides paper to backup our information in case of a technology meltdown?  Battery life only lasts so long.

Have a great day!!

I came from a financial background including banking, insurance and real estate. I am an advocate for people taking there health into their own hands. That includes mental, physical and spiritual health. I am also a mother and grandmother (babcia) to a delightful, rambunctious, curious, beautiful, precious....(I can go on for ever) little boy.. who melts my heart every day.
View all posts by Donna →
This entry was posted in life and tagged backup plans, lessons about self, technology. Bookmark the permalink.
HeartSphere